This year passages from Quaker Faith and Practice will alternate monthly with short poems by the American poet Carl Sandburg.

QFP. 10.09- We were meeting in the long sitting-room, and the floor space was as usual filled by the children. The room was pretty full. Then Sophie’s father came in and put her in her carry-cot on the floor. She was very young, and we hadn’t expected to be greeting her so soon. I looked around the adults, wondering which of us would minister.
At the other end of the room Cathy, aged three, slipped down from her mother’s knee. Slowly, carefully, and mostly upright she clambered in and out, past all the other children. She reached the carry-cot and peeped in at the baby. Then she turned and gave everyone a smile of pure delight. Still smiling, without a word, she returned to her mother.
Nobody else spoke either. Sophie had been welcomed into meeting. (William Fraser, 1989).

Film Evenings – these will start promptly at 7pm in the library, with the film being shown without an interval and a short discussion afterwards. The film for this month is Dead Man Walking which is a 1995 American crime drama film starring Susan Sarandon and Sean Penn, and co-produced and directed by Tim Robbins, who adapted the screenplay from the non-fiction book of the same name. Sister Helen Prejean (Sarandon) establishes a special relationship with Matthew Poncelet (Penn), a prisoner on death row in Louisiana, acting as his spiritual adviser after carrying on correspondence with him. It runs just under 2 hours and there are some harrowing scenes so be warned! It will be shown on Friday 28th April.

Holocaust Memorial Day 27th January 2017
by Barbara
As part of my chaplaincy role, I attended the Holocaust memorial Day event at the University of Suffolk where I met and heard from an amazing gentleman Mr Vernon Katz who came to England as a child escaping the Nazis on the Kindertransport. .
He spoke of the changes he faced, his friends all disappeared, the males from his family taken, his mum imprisoned, but before that was the changes in language in attitude. The rhetoric of them and us, the subtle hate which built up to Kristallnacht, a Nazi pogrom throughout Germany and Austria on the night of November 9–10, 1938, during which Jews were killed and their property destroyed.

Vernon wrote “The Blue Salon and Other Follies” which vividly recounts his 1930’s childhood in Lippe, Germany. Through the eyes of an observant young boy, Vernon reveals how Jewish life in a country town gradually eroded as the Nazis came to power. Vernon recaptures his childhood and family life through light-hearted anecdotes and pictures, as well as dramatic events, including his mother’s escapes from imprisonment and death by the Nazis. In the early years of Nazi rule, his parents fail to take heed of the dangers that lie ahead. Rooted in German soil and having built a successful brush factory together, they think it is all a passing phase. Fifteen months after Hitler’s rise to power, when a tribute to his father appears in a German business journal, his mother joyfully redecorates the house and creates the luxurious blue salon. When the Nuremberg Laws are enacted, the situation darkens. Vernon at age ten, is stoned, persecuted and terrified by his Nazi teachers. Ultimately, on Kristallnacht, the author’s father is imprisoned at the Buchenwald concentration camp. The family doctor sends Mrs. Katz to a mental institution to protect her from the Gestapo. As the Nazis grow even more insidious, the family must take desperate measures to try to save themselves.

Over 6 million people were murdered: Jews, Romani’s, homosexuals, dissidents and disabled people. But it didn’t happen overnight; during the 1930s, basic rights were taken away from the Jews and other minorities, for instance a Jewish employer could only employ women aged over 45. Gradually their human rights, such as the right to work and to practice their religion, were taken away. Key lessons learned from the holocaust are that protecting our basic human rights could be an early warning system against tyranny; a society based on justice, equality and fairness protects the individual and protects minorities being persecuted by majorities.

It was almost unimaginable to hear what had happened then we saw so many similarities to the tone of the rhetoric we hear today.

Beverley Levy spoke about the prelude “Letters from Warsaw” by Joseph Phibbs which was based on the book “Marysia” written by Krzysztof Chorzelski and the co-ordinator of the Syrian Resettlement Scheme also spoke about the 200 Syrians who were coming to Suffolk in the next weeks.

I felt hope when we heard from some students from Northgate: they spoke with passion and determination about how these terrible events cannot happen again, about the need to have a society that welcomes and protects the vulnerable and one that does not stand for hate and prejudice. 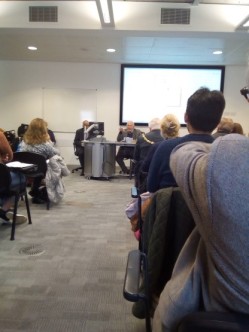 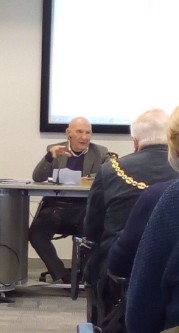 The Pianist
by Richard Stewart
This is a summary of the discussion following the showing of this film, to an audience of twelve, in our library on Holocaust Memorial Day.

1) A brief summary was given of a well-attended Holocaust Memorial Day event, at which Vernon Katz, who came over with the Kindertransport, said that ‘All governments are innocent’, i.e. they reflect the collective consciousness of their people. Unfortunately there wasn’t time to fully discuss this statement.

2. Modern comparisons were made between the building of the Warsaw ghetto wall and that planned between USA and Mexico. Some of the scenes of devastation could have been transposed to Aleppo or other Syrian cities.

3. The Germans justified their actions in the belief that all Jews were greedy, corrupt, inferior and sub-human. Studies were mentioned showing how soldiers, initially reticent about carrying out atrocities, eventually progressed to even worse ones, not only meticulously documenting them but boasting of their deeds in personal diaries.

4. It was pointed out that Jews initially didn’t register strong objection to measures they saw as just inconvenient, not fully realising how the gradual progression in the loss of their rights eventually led to their transportation to the death camps. Some even seemed prepared to believe a German officer’s promises of more food in future.

5. Complicity was discussed, which occurred all over occupied Europe and even with Norwegian civil servants. The question was asked as to whether those ordering the cattle wagons, and knowing their true purpose, were as guilty as Auschwitz guards. Several examples of Jewish complicity within the ghetto were included in the film, especially the actions of the Jewish ‘police’. However, they were also responsible, during the loading of the cattle wagons, for allowing Wladyslaw Szpilman, The Pianist, to escape.

6. The strong human determination to survive, whatever the circumstances, was emphasised, the alternatives in the ghetto being to give up and die or die heroically in an uprising, which the film graphically portrayed. Others outside the ghetto put their lives at risk to help The Pianist and there was discussion about the motives of the high-ranking German officer who discovered The Pianist in hiding, didn’t arrest him, and helped his survival by giving him food parcels. Was he simply reacting to the knowledge that the war was lost and there was no point in killing him? Was he, as the film showed later, hoping that his kindness might be reciprocated? Did he, after listening to The Pianist playing, realise through his own artistic sensibilities that he couldn’t destroy such genius? Or was he just a ‘good Nazi’? The director, Roman Polanski, deliberately included a photo of the officer’s family and showed him carefully reading documents before signing them- some being death warrants? Polanski doesn’t normally ‘do religion’ but the officer’s comments on leaving had a Biblical analogy: ‘Don’t thank me, thank God. It’s His will that we should survive. Well, at least it’s what we should believe in’. Then he gave The Pianist his warm greatcoat as a farewell offering.

7. There was a difference of opinion, arising from the film, about the numbers of people prepared to volunteer in good causes, and if percentage responses were reduced if the volunteering could include the risk of confrontation and even verbal or physical abuse.
The film obviously had considerable impact as it was mentioned in two separate ministries on the following Sunday and in discussion after the Meeting for Worship.

FUNERAL WISHES FORM.
It is normally something that we don’t like to think about, but is something that will save a lot of unanswered questions when we are no longer here and able to answer in person! We have had for a number of years now, a funeral wishes form, which gives instructions as to what to do in the event of your death. The questions on the form are quite straightforward, and will help in the event of your death, with things like memorial meetings.

The idea is that once completed, 3 copies of the form are placed into individual envelopes, one for your solicitors, one for your next of kin and one for your meeting. The outside of the envelope would be labelled ‘ To be opened in the event of my death’ with your name on it as well. These sealed envelopes from Ffriends would then be kept in the office at the meeting house, securely locked away, and only opened and used when needed.

I hope that Friends will consider filling one in so as when the time comes your wishes can be considered. If there are any questions, please ask either Lydia or myself and we will do our best to help.

Editorial Note: ‘Our apologies to Mike Medhurst for errors in the March ‘Golden Envelope‘ article, which didn’t have our normal corrections system -The Editors.
Richard and Barbara

Discussion meetings are held every Sunday in the Library, from 9.15 -10.15am where we are looking at passages from Quaker Faith and Practice, interesting articles from The Friend or any relevant topics.

Dates for your dairy