Discussion meetings are held every Sunday in the Library, from 9.15 -10.15am where we are looking at passages from Quaker Faith and Practice, interesting articles from The Friend or any relevant topics

Tuesday 3rd A debate on ‘Ethical business: can it pay?’ at 6pm at OPEN Norwich. Email robert@robertashton.co.uk

Saturday 14th 10am Volunteers needed to do deep cleaning of the kitchen.
Also Regional Multifaith Meeting

If you wish to donate but can’t attend at the Meeting House, please send a cheque to Rachel Bach made out to “Ipswich Quakers”. Please send this before the end of the month concerned.

This year passages from Quaker Faith and Practice will alternate monthly with short poems by the American poet Carl Sandburg.

October-QFP- 10.19- In a true community we will not choose our companions. For our choices are so often limited by self-serving motives. Instead, our companions will be given to us by grace. Often they will be persons who will upset our settled view of self and world. In fact, we might define true community as the place where the person you least want to live with always lives! (Parker J. Palmer, 1977).

I was fortunate to spend a few days in Brussels, visiting my son, which included a Sunday so I was able to attend the Quaker Meeting House. It is a beautiful mansion, built at the turn of the 20th century and an Art Nouveau building of architectural distinction. The house has been owned by Quakers since 1985 and is at Square Ambiorix 50, 1000 Brussels. 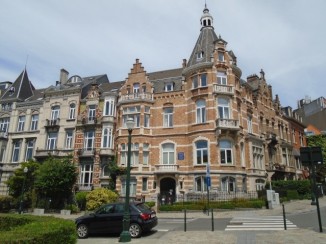 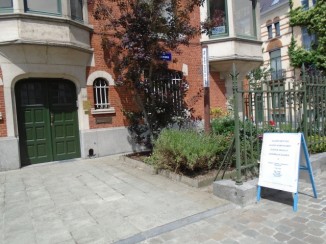 It has been recently refurbished with the generous support of the City of Brussels. It is occasionally opened to the public as part of the Brussels Patrimony Day. The first floor interiors, restored to their end of century character are glorious, featuring wood panelling, polished wooden floors, and stained-glass windows and doors. Each room is approximately 25 square metres, and partitions can be opened so each room opens into the next: the dining room leading to the Meeting room through to the Margaret Fell lounge. The rooms are available for conferences and informal gatherings which are available to organisations for public and private meetings, and recently a wedding. 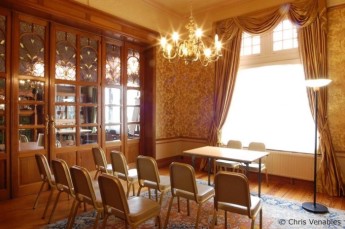 Meeting Room set out for Meeting

The ground floor of the building is home to the offices of the Quaker Council for European Affairs. The Director of QCEA is Andrew Lane a former British policeman and interesting and welcoming man. I was informed that since his arrival two years ago, he has turned the place around to a vibrant Meeting. There were only ten Friends there when I attended but was told it is usually between 20 and 30 and sometimes there are 45 Friends attending. I was also told that one of the attractions is that they have “real” coffee! One of the Friends I spoke to actually came from Capel St Mary originally and attended Ipswich High School but I forgot to ask her name. 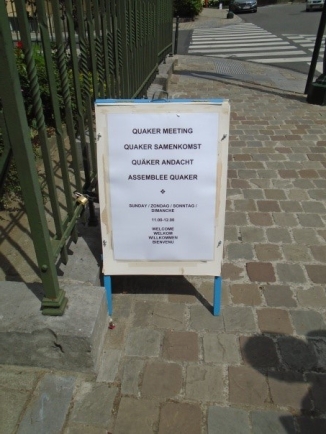 “A” Board advertising Meeting

Friends in Meeting Room after Meeting
The room, which is on the first floor, was set up with chairs around the walls of the room and a second row inside on two of the sides. A small, low table sat in the centre of the room holding about four Quaker Faith and Practice books, a Bible and another couple of books and a lit candle in the middle. The doorkeeper stood downstairs for ten minutes, to assist late comers, and then she went into Meeting. The porch contained shelves and displays of leaflets to be taken. During the Meeting, one Friend ministered on conflict and troubled times and read 19.43 QF&P

A letter from Isaac Penington in 1665 re-echoes Thomas Ellwood’s reminder that we must not despise ‘the day of small things’ (Zech 4:10):

Do not look for such great matters to begin with; but be content to be a child, and let the Father proportion out daily to thee what light, what power, what exercises, what straits, what fears, what troubles he sees fit for thee; and do thou bow before him continually in humility of heart… Thou must join in with the beginnings of life, and be exercised with the day of small things, before thou meet with the great things, wherein is the clearness and satisfaction of the soul. The rest is at noonday; but the travels begin at the breakings of day, wherein are but glimmerings or little light, wherein the discovery of good and evil are not so manifest and certain; yet there must the traveller begin and travel; and in his faithful travels … the light will break in upon him more and more.

The purpose of QCEA is to “promote Quaker values at the European level. We advocate non-violent approaches to conflict resolution, promote policies that respect the intrinsic equality of all people everywhere, and try to ensure that European policy sustains the planet’s resources and the lives of all those who share them”. They have been there since 1979.

My mother, Bon’s house is up for sale and along with it is the earth build we built in her garden. The earth building will soon be inaccessible and so a visit was arranged for those interested and who attend Ipswich Meeting.

Tea, squash, cakes, biscuits and snacks were laid on lunchtime Saturday 24th June. We engaged in a pleasurable couple of hours explaining how the earth build studio was constructed via conversation and a PowerPoint presentation I had put together.

The project was originally designed to replace a run down old shed with the earth studio in which Bon could work on her clay modelling. I set some aims for myself having never built such a structure before. I attended a couple of week long courses to educate myself in how to build with earth and straw bale, and now continue to keep in contact with EBUKI (Earth Builders UK and Ireland).

As far as possible all materials were to be recycled or to use what would be deemed waste products.

The windows, bricks and rubble came out of skips. The clay and sand came out of the ground. Straw bales used are an underused by-product of the farming industry. These materials made the walls.

The roof beams are made using green wood from a firewood supplier who otherwise would have cut the lengths to burn. The roof platform was made using off cuts from a timber yard.

The living roof used plastic waste, 2nd hand carpet and the most expensive single item, the pond liner. For the living roof turf was cut from Bon’s lawn.

The earth mixes that made the walls and floor were all foot trod, an arduous process hard on the joints and heavy work. The clay render mixed with pigment of my choice and the lime render coated on with very little previous experience.

Books were our building companions helping to solve some of the problems we came up against. Each stage was taken on a step by step problem solving exercise.

What did I discover in building such a studio?

Two people and a level with very little building experience can build a brick wall made from recycled materials that takes several tonnes of soil in weight. That they can also make the structure light inside, beautiful inside, beautiful outside, water tight and durable.

My research and experience in earth building over the years has led me to ask. Is this a type of technology we should be considering using more of in our mainstream housing stock, considering its low carbon footprint? The answer I have arrived at is: that it is most definitely is a solution that should be adopted and more widespread than it currently is. The mainstream building industry needs to look at the carbon footprint it makes and adjust the materials, transport and design of the large structures accordingly. The new way of working with earth mixes in buildings and the new technologies developed to work with this environmentally friendly material have been tested and passed health and safety and building regulation requirements.

Thanks to our friends who came and shared such a pleasant afternoon.
Treasured Times. 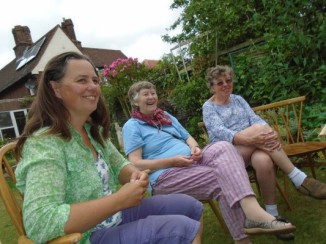 Our monthly Wednesday discussion groups continue apace. We had 25 people attend our last session on Douglas Harding, Who Was He? What is Headlessness?
Although I am not sure that many questions were answered to full knowledge of the subject, we all had a very interesting and challenging discussion. Mike King Led the evening, informing us of his spiritual journey in which Douglas Harding played a large part. Anne Seward, a friend and workshop leader of Headlessness with Douglas, gave a couple of examples of the exercises in order for those gathered to experience it. It is not a “heady” or academic or theological knowledge, it is more an experiential way of being. For more information check out http://www.headless.org/ where you can find out more about Douglas Harding and also the experiments of being headless.
Barbara

The Douglas Harding session held on 13th September, gratefully introduced by Mike King was an interesting and lively event from my perspective which highlighted two very different spiritual proclivities.

Some years ago I conducted a short Douglas-type workshop for SIFRE (as it was then) which Mike attended. It got back to me afterwards that he had put it about that “there was something missing”. I was reminded of this when he said the same thing on Wednesday about Douglas’ wife Catherine. This caused me to think that, following a devotional path, he would probably feel the same way about anyone (with the exception of Douglas presumably!) who was attempting to utilise the jnana-type experiments to convey their message to others, which Douglas so strongly encouraged people to do.

As should be obvious, the appeal of the experiments is to truth and is not based on a guru-disciple set-up. Mike’s comments are thus rather ironic when one considers how absolutely central Douglas himself considered them to be to his teaching, not least because, like scientific experiments, they are essentially repeatable by anybody, irrespective of that person’s spiritual maturity, not to mention their charisma or lack thereof.

On a different note, I hope it was obvious to the participants on Wednesday that, while the experiments may be new, the claims they put to the test of observation (for instance – all the senses may be deployed in a longer workshop) are deeply traditional in nature.

And lastly, let me emphasise that glimpsing one’s True Nature represents only the first step on this particular path of Self-knowledge. The challenge then is to practice, practice, practice the ‘wakefulness’ implied by whatever means you find helpful until it becomes – as it was in infancy but now with full consciousness – one’s natural way of being.