Our collection this month is for: Médecins Sans Frontières (MSF) founded in 1971 in France by a group of doctors and journalists in the wake of war and famine in Biafra. Their aim was to establish an independent organisation that focuses on delivering emergency medicine aid quickly, effectively and impartially. It continues to work throughout the world to help victims of conflict. Its hospitals have been bombed in error by United States Air Force.

If you wish to donate but can’t attend at the Meeting House, please send a cheque to our treasurer Cath Minchin made out to “Ipswich Quakers”. Please send this before the end of the month concerned

This year we will alternate passages from QFP with the short poems of D.H. Lawrence. Best known for his novels, Lawrence was also a good poet, especially in the pioneering way he wrote about animals.
QFP 23.73. The Quaker understanding of Christianity includes : the experience that it is possible to have both a strong faith commitment and an open mind, to take other positions seriously without trivialising them, and to value the people who differ from ourselves. (Janet Scott, 1988).

FILM NIGHT
Our Film Night is on Friday 25th May and is “The Woodsman”. A man returns to civilian life after being in prison for a serious paedophile offence -a thought-provoking film starring Kevin Bacon, whose performance is somewhat different to his current adverts on television- with sub-titles.

Did you know? Becoming Friends is now available as a course on the Woodbrooke Moodle learning site and it’s now free to access!
http://together.woodbrooke.org.uk/welcome.php

If you’ve never been to a Death Cafe, and find the idea rather off-putting, that is probably because it is just what you need. Modern society, especially the medical profession, is geared to alleviating or wiping out traditional illnesses, so that we all have greater expectancy of life than we imagined in our youth. But because we live longer and can seek cures for most of our ills, we are inclined to push aside and deny the idea of death.

But death is the one thing, perhaps the only thing in life, which we can absolutely guarantee will happen, and it will happen to us all, sooner or later. Yes, it is scary. But rather than push away the thought of death, while still feeling a dull half-denied fear, why not face up to it. The only sane way to handle the inevitable is to turn round and say hello to it.

The Death Cafe is designed to do just that….to get you talking and thinking about death; not in a grave and lonely way, but in a comfortable relaxed way amongst friends. There’s coffee, and cake, and confidentiality. It will probably be a reassuring and enjoyable experience, and you might go home seeing death as natural and even friendly, and certainly worth giving thought to.

The Death cafe is not for those still suffering after a bereavement or an unwanted diagnosis, but for people who are feeling ok about life. We sit at tables of four so everyone has a time to speak. It’s a place to listen, chat, and muse about every aspect of death; wills, final wishes, funerals, expectations and worries, memorials, religious beliefs, and so on, and to find that you have many of the same concerns as others. It’s not a sad or weighty process, though it is a serious one, and there will be laughter. You’ll probably enjoy it.
Helena Woddis

‘I have observed that I cannot be an object for an object. A radical conversion of the Other is necessary for me to escape objectivity. Therefore I cannot consider the Look which the Other directs on me as one of the possible manifestations of objective being: the Other cannot look at me as he looks at the grass’ – Jean-Paul Sartre, Being and Nothingness

The philosophy of existentialism is in some ways unique in philosophy in that instead of it being about investigation and questioning of the world, it asks us to question ourselves – who are we? Why are we here? What is the purpose of my life? How should I live?

Ant Wooding led the discussion with a talk on the atheist philosopher Jean-Paul Sartre’s Being and Nothingness – written while Sartre was a prisoner of war in WW2 it challenges the reader to live authentically, recognising we are who we create ourselves to be. Because we are free we are all responsible for our own lives, we make our own choices, we are free to reimagine our past, and we are free to choose our future too. Yet all too often we hide in our roles and pretend to ourselves the choices we made in the past now determine our future – we fear our freedom and so live in what Sartre called “bad faith”.

John Mann accompanied Ant’s talk with a short summary of the ideas of the Jewish philosopher Martin Buber and the Christian philosopher Gabriel Marcel – both of whom felt we had lost our humanity in modern society and needed to recover our connections with each other and through this new, deeper experience of love for humanity, nature and the world to discover again an encounter with God, the ground of our being. 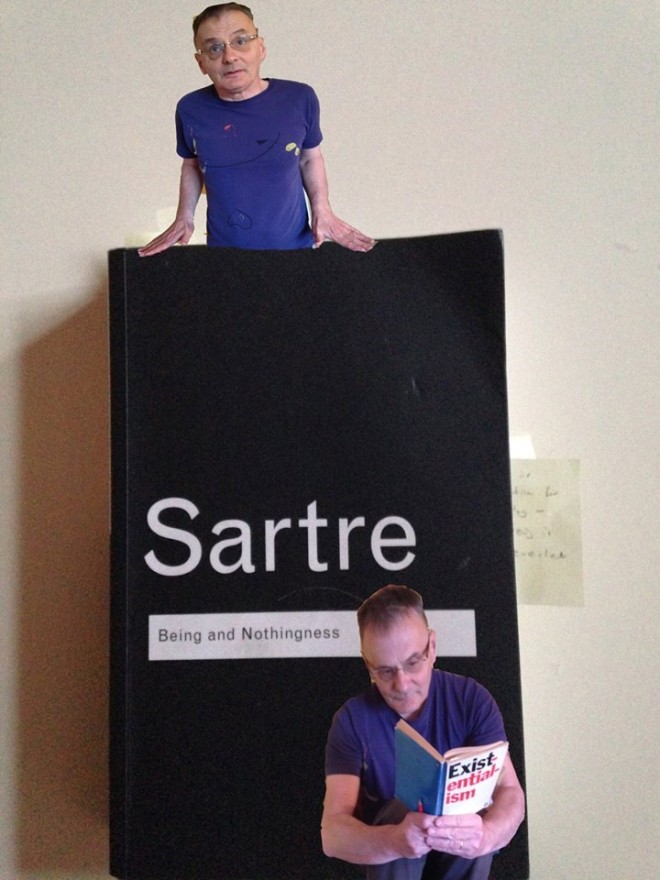 On 10th January about 25 attended when John Mann and I led the discussion, myself on Jean Paul Sartre’s atheist existentialism and John on religious existentialist thinkers, particularly Martin Buber and Gabriel Marcel

I introduced the fundamental premise of L’Etre et Le Neant (Being and Nothingness) (1943): ‘existence before essence’ and that we strive in our consciousness for our sense, constantly grappling with nothingness is so doing. I gave Sartre’s three categorisations Etre en soi (Being-in-itself), Etre – pour-soi (Being- for -itself i.e. our consciousness engaged) and Etre- pour- autrui (Being- for -Others)

Taking these categorisations, Sartre poses some key philosophical questions for us, and as he was a novelist too (a rarity for a philosopher) he does so in graphic ways. The dilemma of ‘Being for Others’ is described in catching momentary sight of a mannequin in a shop window. Momentarily we think it is a person (let’s say Pierre), but then see it is an object. We strive to make objects of Others to keep/recover our own sense of being, but we are equally objects to them. And where is Pierre when he is not here? He is an image in my reflected consciousness.

Sartre also introduces the concept of ‘bad faith’. The waiter or the judge plays at a role. There can be no such identities or claims of right. What are these people when they are at home, stripped of their uniforms? Even the past is up for grabs: we recreate it for future projects. But this very uncertainty and indeed anguish creates constant possibilities for us, including in the realm of ethics. ‘We are condemned to be free’. ‘The chips are down only when we make a deliberate choice’

John introduced Martin Buber and his two concepts which seem to dovetail with Sartre’s: ‘I-It’ and ‘I –Thou’ (I- You) . By these, Buber can solve the mannequin/Pierre dilemma, or solve it differently. When we treat as object, which can be inanimate, but also another person or persons, we are in ‘I-It’ mode. A lot of our dealings, indeed most, are in that mode. But we would do better to ‘encounter’ the Other as ‘I-You’, and in so doing avoid at least some of Sartre’s angst. We are helped to keep in ‘I-You by two things: love and faith (not bad faith!).

Gabriel Marcel (who hung out with Sartre) has a similar approach but uses terminology of problem-solving for the ‘I-It’ states and mystery for other states. The latter doesn’t even have to involve an Other (You) at all. If I am hopeful in the pure sense (as opposed to hoping e.g. for a pay rise next week, or a miracle cure for my ailment), or in belief, I am in those states. I am hope, I am belief.

We then broke into very interesting discussion and feedback. The overlap of thinkers was clear, although generally Buber was felt to be the more resonant for the group, certainly the more positive. Equally though several of us had experienced existential angst at one time or another! We didn’t generally think that there are intrinsic ‘ought’ values (to adopt also Hume’s category there which also overlaps) – indeed some of us were not happy with the expression ‘ought’ itself. Many such values come from religion directly or indirectly: even if religion may have largely left the society in question (e.g. Judeo-Christian societies). But some at least felt that we could develop (redevelop?) those values from careful analysis of our experience and relations with others. Further, some felt that another help we have here – alongside Buber’s faith and love and Marcel’s mystery- is Nature, and our relation with it. Whilst understanding that the tree, or the view from the mountain top ‘just is’ (being), we also experience its awe and beauty. This can give us a spiritual grounding to help us get to come to terms with Pierre/mannequin and get us (nearer) to Buber’s I- Thou. Indeed whilst Sartre was an atheist, he was not immune to Nature. In his novel ‘Nausea’, predating ‘Being and Nothingness’, the protagonist finally comes to terms with existence, which would include his own and others and his task in the world therefore, through a walk in the park.

I conclude by repeating a quote given to me by John which I used in my talk, attributed (although it seems disputed attribution!) to another French thinker, indeed a Pierre to boot (!): Pierre Teilhard de Chardin:
‘We are not human beings having a spiritual experience; we are spiritual beings have a human experience’